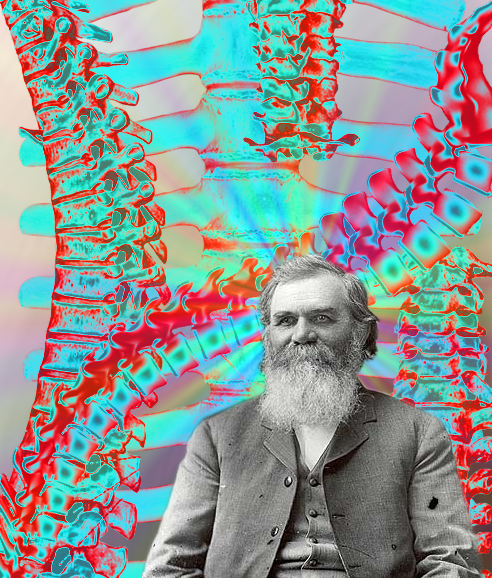 Chiropractic is a surprisingly popular form of alternative medicine - so mainstream that it’s hardly ‘alternative’ and so non-scientific that it’s barely ‘medicine’.

Chiropractors again became an easy target with the recent widespread coverage of a video showing Melbourne-based practitioner Dr Andrew Arnold folding, dangling and then gently pummelling a two-week-old baby with a rod.

Aside from treating lower back pain - and the evidence for its usefulness there is pretty scant – it’s not hard to find chiropractors claiming to address ailments from bed-wetting and allergies to sexual dysfunction, mental health issues and a general lack of ‘wellness’.

But for me, the most ridiculous part of this absurdity-laden field is its founder; magnetic healer, master manipulator, musculoskeletal messiah – DD Palmer.

Daniel David ‘DD’ Palmer is a man who, in 1895, had been ‘treating’ patients with his magical, magnetic hands.

DD Palmer was an odd mix of scientist, spiritualist, and salesman – combining new ideas and technology (like the scientific method, electricity and magnetism) with good old-fashioned guessing to inform his view of physics and health.

His big breakthrough came when on a spiritualist camp, Palmer received the basic principles of chiropractic during a séance, passed to him from the spirit world by the long-dead Dr Jim Atkinson.

“The knowledge and philosophy given me by Dr Jim Atkinson, an intelligent spiritual being, together with explanations of phenomena, principles resolved from causes, effects, powers, laws and utility, appealed to my reason,” Palmer wrote.

“The method by which I obtained an explanation of certain physical phenomena, from an intelligence in the spiritual world, is known in biblical language as inspiration.”

He described his seminal book, The Chiropractor's Adjuster, as having been “written under such spiritual promptings”.

The spirits of the dead led Palmer to his belief that “a subluxated vertebra ... is the cause of 95 per cent of all diseases ... The other five per cent is caused by displaced joints other than those of the vertebral column.”

Practical application of this new idea also came in 1895, when Palmer performed what is considered the first ever chiropractic adjustment of the spine.

Accounts vary as to exactly what happened.

DD Palmer says he learned that Harvey Lillard, a janitor in his office building, had a lump in his back that occurred at the same time that Mr Lillard had lost hearing in one ear, years before.

So, Palmer had Mr Lillard lie on his stomach and receive ‘corrections’ of the spine, after which the patient said he could hear “rackets in the street” that had eluded him before.

Palmer praised his own apparent mastery on the first go.

“There was nothing accidental about this, as it was accomplished with an object in view, and the expected result was obtained,” he wrote.

“There was nothing ‘crude’ about this adjustment; it was specific so much so that no chiropractor has equalled it.”

Ms Simons says her father had actually been telling jokes to a friend in the hall outside Palmer's office when Palmer came out from reading and joined them.

Palmer apparently took the term ‘punchline’ too literally, smacking Mr Lillard hard on the back with a heavy book still in hand.

Days later, when Mr Lillard told Palmer that his hearing seemed better, Palmer quickly claimed to have been the source of the improvement.

This inspired Palmer to explore manipulation as a new service to provide alongside his magnetic healing practice and, Ms Simons said, he even promised his first patient a cut.

“The compact was that if they can make [something of] it, then they both would share. But, it didn't happen,” she said.

Critics have since suggested that a spinal adjustment could not affect hearing - because the spinal nerves do not extend into the brain, where cochlear nerves are located.

But still, Palmer’s ideas about the supremacy of the spine persist today, with chiropractors pushing the foundational importance of the so-called ‘neuroskeleton’.

It should also be noted that while subluxation (a partial dislocation, visible on x-rays) is a common and useful medical term, its legitimacy has been co-opted in the chiropractic notion of ‘vertebral subluxation’.

To chiropractors, a ‘vertebral subluxation’ is a very real and dangerous dislocation of the spine, which does not show up on an x-ray but is obvious to hands of a practitioner who charges $60 to $100 per session to reveal it. You will, of course, require repeat visits.

This is not a universal belief in modern chiropractic, with even the peak lobby Chiropractic Australia having the official stance that the vertebral subluxation complex (VSC) is a “theoretical model … not supported by any clinical research evidence that would allow claims to be made that it is the cause of disease”.

In fact, policy statements issued by Chiropractic Australia offer an insight into the wide range of fringe ideas that take hold among chiropractors.

Anti-vaccination is particularly strong among chiropractors, likely based on DD Palmer and his son BJ’s views that that the smallpox vaccine was “a filthy animal poison” and that the germ theory of disease is false, because only a subluxation-free spine, achieved by spinal adjustments, can result in an unfettered flow of ‘innate intelligence’.

DD Palmer kept religion and metaphysics tightly entwined in his chiropractic philosophy, encouraging the field to be seen as a new type of faith.

“The practice of chiropractic involves a moral obligation and a religious duty,” he wrote.

“By correcting these displacements of osseous tissue, the tension frame of the nervous system, I claim that I am rendering obedience, adoration and honour to the ‘All-Wise Spiritual Intelligence’, as well as a service to the segmented, individual portions thereof.”

He frequently referred to himself as ‘Old Man Chiro’ or the ‘Fountainhead’, styling himself as the prophet of a new medical religion.

Like many religious figures, DD Palmer’s death is surrounded by intrigue.

DD’s relationship with his son BJ Palmer had soured by the time of his death in 1913. BJ had been one of DD’s first chiropractic acolytes (calling himself a practitioner at age 12) and had advanced the field enough to be able to take over his father’s school.

But the two had regular disagreements about the direction of the emerging field of chiropractic, and the son also harboured deep resentment about his father’s violent parenting style and obsession with chiropractic that ran so deep, “he hardly knew he had any children”.

Records state that during a parade in Davenport, Iowa, in August 1913, DD was marching on foot when he was struck from behind by a car driven by BJ.

DD Palmer died two months later in Los Angeles, California, with an official cause of death listed as typhoid fever.

Many believe he actually died as a result of injuries caused by his son’s car. The executor of DD’s estate filed a civil suit against BJ, but courts exonerated the son of responsibility for his father's death.

The Scott County District Attorney sought a murder indictment against BJ, but it was abandoned after two grand juries failed to reach a consensus.

While many modern chiropractors probably don’t receive life-changing messages from dead doctors, DD Palmer is where their ideas came from.

There must be some more serious thinking happening now, since the field has grown away from its mumbo-jumbo origins to the prestige of being taught at four Australian universities - RMIT, Macquarie University, Murdoch University and CQU.

But still, personally, I’m going to keep taking advice from people who don’t think my psoriasis is a result of poor posture.