Hello Australia!! - WHO waits while China plays catch-up with the Wuhan Coronavirus - The Rohingya win an important legal battle - What the legendary Neil Young plans to do with his new US citizenship - And more in your CareerSpot Global News Briefs:

For some reason the UN World Health Organization (WHO) is not declaring a global health emergency over the Wuhan Coronavirus that has now killed 18 people and is confirmed to have infected more than 650 patients in and out of China - although some fear the actual toll is much higher.  "Now is not the time," said Didier Houssin, chair of the WHO emergency committee.  "It's too early to consider that this event is a public health emergency of international concern," he added.  The Committee based in Geneva said the spread of the 2019-nCoV bug is an emergency in China, but hasn't seen enough cases worldwide yet.  This coronavirus, from the same family as SARS, is only the seventh one of it group to make the jump from animal-to-animal transmission to humans.

New cases of 2019-nCoV have been detected in Vietnam and Singapore, adding to the list of countries where travelers have carried it since it crossed over in Wuhan City, China, likely at a seafood and meat market.  China is rapidly escalating its efforts to try to contain or control the spread.  In addition to Wuhan, Huanggang and Ezhou are also being locked down - no transportation going in or out, public venues like cafes and theaters are closed.  This impacts more than 18 million people, and many have responded with panic buying at grocery stores and other shops for essentials.  The demand for surgical masks and rubber gloves has soared, and the online retailer TaoBao is warning sellers not to gouge in the time of this national emergency for China.

The International Court of Justice (ICJ) is ordering Myanmar to "take all measures within its power" to protect the Rohingya Muslim minority group from acts of genocide.  It's a major victory for the Rohingya, who've endured a bloody ethnic cleansing from 2017 when the Myanmar military and ethno-nationalist mobs drove 700,000 of them from Rakhine state across the border into Bangladesh and life in squalid refugee camps.  But the Myanmar government has rejected the ruling as a "distorted picture of the situation"; and even though ICJ rulings are considered binding in international law, it has no way to enforce them.

At the World Economic Forum in Davos, Switzerland, Climate activist Greta Thunberg clapped back at a US official who for some reason felt the need to criticize a teenage girl from an ageist perspective.  US Treasury Secretary Steve Mnuchin snarked that Greta should get an economics degree before criticizing the US for its fossil fuel investments.  Greta responded, "It doesn’t take a college degree in economics to realise that our remaining 1.5 C degree carbon budget and ongoing fossil fuel subsidies and investments don't add up," adding, "So either you tell us how to achieve this mitigation or explain to future generations and those already affected by the climate emergency why we should abandon our climate commitments."

Later in the day, New York Congresswoman Alexandria Ocasio-Cortez (AOC) supported Greta: "If you don't have an economics degree like Greta, they'll mock you for not having one.  If you DO have one, as I do, they'll claim it's illegitimate," AOC wrote.  "Haters gonna hate and deniers will deny.  They will deny logic, science, and environmental consensus in order to protect oligarchy."  AOC is a vocal champion of a Green New Deal resolution in the US Congress, which seeks to have energy in the U.S. to be generated through "clean, renewable, zero-emission sources".

Moving along to the World Holocaust Remembrance in Jerusalem, Prince Charles TOTALLY dissed US Vice President Mike Pence by visibly passing by him in a handshaking row and moving straight over the Israeli Prime Minister Benjamin Netanyahu and French President Emmanuel Macron.  This was just after telling world leaders that the lessons of the Holocaust are still "searingly relevant" and called on world leaders to be "fearless in confronting falsehoods" and violence.  Earlier, Charles made a point of shaking Greta Thunberg's hand and calling her "remarkable".  Buckingham Palace released a statement claiming that Charles shook hands with Pence in private.  The event coincided with the 75th anniversary of Soviet troops liberating the Auschwitz death camp.

In Poland, a high level delegation of Muslim and Jewish leaders marked the anniversary with a "groundbreaking" visit to the site of Auschwitz, preserved by Poland's government.  The group was led by the secretary general of the Muslim World League, Mohammad bin Abdulkarim Al-Issa, and the CEO of the American Jewish Committee, David Harris.  "To be here, among the children of Holocaust survivors and members of the Jewish and Islamic communities, is both a sacred duty and a profound honor," Imam Al-Issa said.  "The unconscionable crimes to which we bear witness today are truly crimes against humanity."

Neil Young will continue Rocking in the Free World as an American citizen.  The color in the street was Red, White and Blue, as the 73-year old Canadian-born legend walked out of his citizenship ceremony with wife Darryl Hannah (!) waving his naturalization papers, and explaining why he did it after so many decades:  He wants to vote against Donald Trump in the November 2020 presidential election. 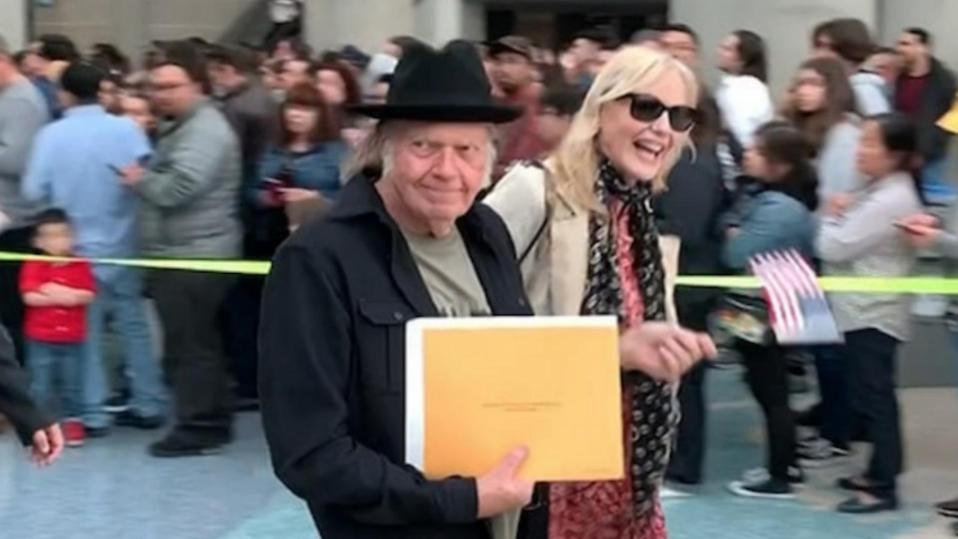 Seriously, this is why he did it.