Iran's only Olympic medal-winning female athlete announced on social media that she has defected to the West, decrying her country's systematic oppression of women.  Describing herself as "one of the millions of oppressed women" in the country, Taekwondo champion Kimia Alizadeh accused Iranian authorities of using her as a propaganda tool.  Ms. Alizadeh, seen here in the red, pulled bronze in the 2016 Olympics in Rio. 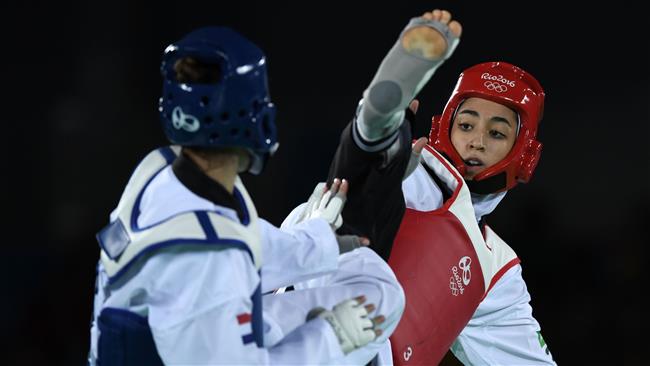 Among the humiliating - and frankly, idiotic - indignities she weathered, the 21-year old says that while authorities attributed her success to wearing a headscarf, while telling her not to stretch her legs because it was not "virtuous".  And if you've ever trained martial arts at any level, you know that stretching is the most important first step in physical conditioning.  Three months ago, Iranian judo athlete Saeid Mollaei defected over fears for his safety after he ignored orders from Tehran to pull out of international matches to avoid a potential final meeting with an Israeli opponent.

This high-profile defection comes as protesters continue demonstrations in Iran's capital Tehran, angered over the government's delay in admitting responsibility for accidentally shooting down a Ukrainian passenger plane last Wednesday.  Tensions in the region are still very high after the downing of Flight 752, which killed all 176 people on board; it happened as Iran was firing missiles at US targets in Iraq, which was retaliation for the US airstrike that killed Iranian military general Qassem Soleimani on 3 January.  The Emir of Qatar this weekend was the first world leader to visit Tehran after Soleimani's death, urging all sides to crank down the hostilities.

Meanwhile, rockets struck Iraq's Al-Balad Air Base north of Baghdad, wounding four Iraqi troops.  The base hosts US Air Force F-16 and a number of US personnel, but none were reported hurt.  Pro-Iranian militias had vowed to continue harassment of the US presence in Iraq in retaliation for the death of Soleimani.

Australian sailors could soon find themselves in the middle of confrontations with Iran, as the government has ordered HMAS Toowoomba to leave Stirling naval base south of Perth today to take part in a 6-month patrol of the Strait of Hormuz.  "This highly capable vessel will focus on promoting maritime security, stability and prosperity in the Middle East by supporting counter terrorism, preventing piracy, and freedom of navigation," said Defence Minister Linda Reynolds.  The HMAS Toowoomba hosts 190 personnel.

The Taal volcano in the Philippines belched up a giant plume of ash reaching one kilometer in the sky, forcing Manila International Airport to suspend flights.  The Philippine Institute of Volcanology and Seismology raised the alert level, warning that a "hazardous eruption" was possible within weeks.

Eleven migrants drowned off the west coast of Turkey after a boat taking them to Greece sunk in the Aegean Sea.  The Turkish Coast Guard says eight of the victims were children.  On Saturday, Greece's coast guard said twelve migrants drowned in the Ionian Sea and 21 others were rescued after their boat took on water and sank.

The provincial government of Ontario has ordered an investigation into the false alarm from a nuclear power near Toronto plant that sent shivers up millions of Canadian spines.  People awoke to an alert about an "incident", followed by another announcement an hour later:  "There is NO active nuclear situation taking place at the Pickering Nuclear Generating Station," the Ontario Power Generation company said, "The previous alert was issued in error.  There is no danger to the public or environment."  No radiation, no melt-throughs, no birds dropping out of the sky.  This apparently happened during a safety drill.