Howdy Australia!! - New audio seems to confirm Trump's plot against a US Ambassador - The Wuhan Coronavirus appears in two new locations far from China - To boldly steal what's never been stolen before - And more in your CareerSpot Global News Briefs:

Nearly discovered audio appears to show Donald Trump ordering associates to "get rid of" the US Ambassador to Ukraine Marie Yovanovitch in 2018.  Sound like someone who watched too many mafia movies and learned the wrong lesson, the voice resembling Trump's says: "Get rid of her!" and, "Get her out tomorrow.  I don't care.  Get her out tomorrow.  Take her out.  OK?  Do it."  The actual recording has not been released, but has reportedly been forwarded to Federal investigators.

ABC News in the US is reporting the recording appears to capture Trump speaking about Yovanovitch to Lev Parnas and Igor Fruman, former associates of Trump's personal lawyer Rudy Giuliani, at the Trump International Hotel in Washington, DC.  Parnas is now cooperating with investigators, and recently revealed that another Trump associate was keeping Yovanovitch under surveillance.  Giuliani told The New Yorker in an interview published last month that he believed he needed Yovanovitch "out of the way" because she was going to present an obstacle to Trump's attempt to coerce the Ukrainian government to investigate Trump's political rival Joe Biden and his son Hunter.

Drip by drip, the Pentagon is slowly admitting what actually happened in Iran's missile attack on US troops stationed at two Iraqi air bases earlier this month.  Now, they say that 34 US troops have been diagnosed with concussions and traumatic brain injuries (TBIs).  At first, Trump and the military said no one was injured, then later admitted that troops were taken to Landstuhl Air Base in Germany which has a hospital that specializes in TBIs.  Far worse than first acknowledged, at least eight of the troops were then sent for even more specialized treatment at Walter Reed Medical Center outside Washington.

Thousands of supporters of Iraqi Shiite Muslim leader Muqtada al-Sadr took to the streets of Baghdad to demand that US troops leave the country.

The death toll is 18 lives lost and likely to climb after a magnitude 6.7 earthquake struck eastern Turkey at the town of Sivrice in Elazig province.  Sitting on two fault lines, several aftershocks have already struck.  The quake caused a massive fire in a tower block.

Two cases of the new Wuhan Coronavirus 2019-nCoV have been confirmed in France, and a woman in her 60's in Chicago has also been diagnosed, marking America's second case.  The US Centers for Disease Control (CDC) says 63 people are being monitored for symptoms of the pneumonia-like respiratory disease that is believed to have crossed over from animals to people just a few weeks ago.  China is acknowledging 26 deaths and more than 900 infections; authorities, using the power of a command economy, have ordered a new hospital be built in just ten days in Wuhan City to deal with the crisis - video of the effort going viral on social media.

A warehouse blew up in Houston, Texas, killing two people.  Investigators are trying to figure out what hellish chemicals were stored there to cause the blast, which was caught on security cameras in the area.

And the US revealed the new logo design for the new Space Force, the sixth branch of the US military.  As millions have pointed out on social media, the logo goes where other logos have gone before... it's a flaming rip-off of the Starfleet logo from Star Trek. 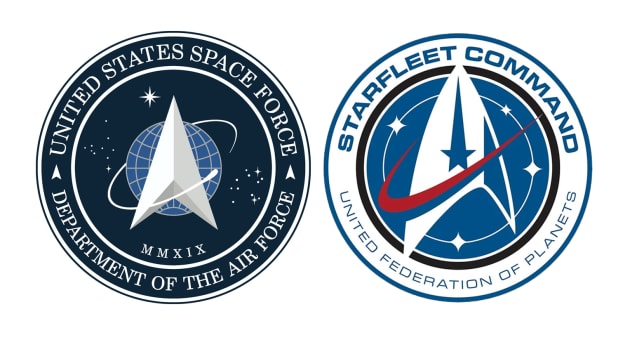 "Mr. Sulu" George Takei commented, "Ahem.  We are expecting some royalties from this."