Better look for life through a mineral lens 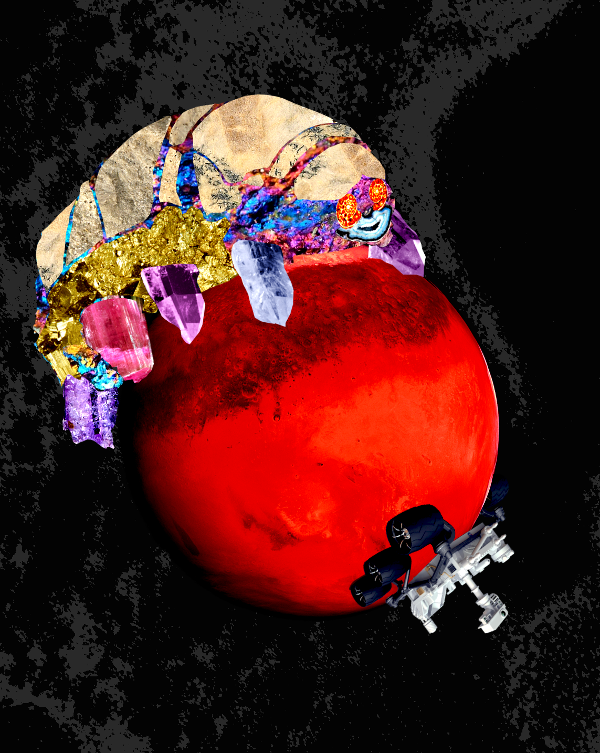 In the search for life on other planets, we can only look for things we know work on Earth.

Luckily - if Earth is anything to go by - life is tenacious, creative, adaptable and overall; ubiquitous.

It seems that anywhere life-forms can get the smallest foothold; they will grab with all their might, propagating and evolving until new grounds become a new home.

As our minds and probes extend out into the universe, our knowledge of life’s myriad forms continues to increase.

A new link was added just recently from studies of a modern lake in Western Australia, following findings in samples from 3.5 billion-year-old rocks in the Pilbara.

Microbes with a particular chemical makeup have been discovered to attract the mineral stevensite, which eventually encases them to form rocky bacterial communities called ‘thrombolites’.

The exciting find is just one more thing to look for in samples from outer space, so we spoke to Dr Bob Burne, Adjunct Senior Research Fellow at the ANU Research School of Earth Sciences for more information.

Dr Burne says the microbes of Western Australia’s Lake Clifton can do something pretty special.

“Normally, stevensite is a clay mineral that forms in very alkaline water, and rather warm waters, so generally its associated with very alkaline lakes close to volcanic areas... but where it was forming in WA is completely different,” he said.

That meant something else was creating the environment to form the stevensite.

“The environment that allows the stevensite to form is the organic chemical gel that forms around microbes,” he explained.

“Microbes have a protective organic layer, and that affects the chemistry of the immediate environment.

“When you have a web or mat of microbes growing on the floor of the lake, then waters that get trapped in that mat are in quite a different environment to that of the lake around it.

“It’s that special environment of the extra-cellular polymeric substances that are exuded by the microbes, that produce the environment that allows the stevensite to precipitate,” Dr Burne said.

The stevensite thrombolites in Lake Clifton not only protect their single-celled inhabitants with a solid casing, they give some other creatures a place to live too. Looking for ukrainian girl? Best ukrainian wives websites with real profiles. Find ukrainian bride online.

“It helps to build a rigid structure which prevents the microbes from being washed away by current, and in lots of environments allow the microbes to co-exist with a certain number of small animals,” Dr Burne said.

“There’s a definite balance between the diversity of the fauna that you can have around them so that they don’t get eaten, but like a coral reef it affords protection and a stable environment [so] that even in quite strong ocean conditions you can still preserve quite fragile things within the reef.

“This is a strategy that is rare today, so when we found these things in Lake Clifton it was probably the first modern example of them to have been found,” he said.

“The thrombolite actually co-exists with little animals. So in the Cambrian era you had little trilobites living in holes in the thrombolite... here we’ve got other small organisms that live in the holes... similar to the little shrimps and fish that bore into the coral reef and use it for protection.”

“This is interesting because in geological history, especially in the Proterozoic - before higher organisms evolved and everything was microbial - you still get these big bodies of limestone that formed as reef, rather like the Great Barrier Reef,” Dr Burne said.

“But how on earth did they form when there were no skeletons to form the reef?”

“This for the first time explains how you can get microbes becoming mineralised and then calcium carbonate coming in an obliterating the earlier structure... and there’s often no traces of a fossil within these deposits... that’s why we called it in the paper ‘a missing link’,” he said.

The discovery of this entirely new process adds another chapter to the science community’s manual for finding life outside Earth.

If vaguely similar ingredients came together in a manner like that which has occurred on Earth, life will be out there.

The rover Curiosity is on the surface of Mars looking for signs that life may once have existed there. It has actually discovered areas of a mineral similar to stevensite that, because it requires water to form, may indicate a former habitable environment.

Dr Burne stresses, however, that the stevensite-like mineral on Mars most likely formed without the influence of microbes, though the possibility cannot be excluded.

“At the moment the Mars geological program is guided by very eminent and experienced scientists,” he said.

“But the paradigm that they’re using to look for life on Mars is one built on the association of microbes with calcium carbonate-forming minerals, or iron-forming minerals, and there’s no priority for them to examine stevensite-like minerals to see if there are remnants of microbial activity or evidence of life.”

“So what happens is when the Mars rover is trekking around, existing paradigms influence the people selecting areas for analysis. So far stevensite-like mineral occurrences haven’t really been considered a suitable place to examine for evidence of life,” he said.

While it is possible for Curiosity to use this extra bit of information in its remaining investigations, the experts say the most important part of the recent finding is to inform similar searches in the future.

For Dr Burne and most others who follow this sort of thing, it’s yet another example of tiny microbes’ ability to pop up wherever possible – including places where macroscale life-forms could never have imagined.

“Microbes form in really unexpected places... years ago I thought they were limited by extreme heat, but we’ve seen microbes now which live in very hot situations,” he said.

“These strategies of thrombolites and stromatolites...people think of them as extinct, but they’re a sort of background ecological strategy.”

“When the sea returned after the last Ice Age, the first things to build reefs were actually microbialites.”

So as our reach into space extends year-by-year, we will know what to grasp for thanks to findings in our own backyard.

As we use science fiction and fact to imagine what we might find, research such as this project shows that the quest for life in outer space is less a question of ‘if’ as ‘when’.