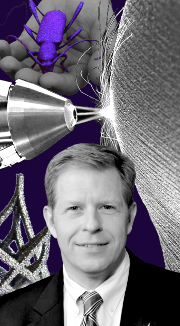 With driverless vehicles rolling around mine-sites right now, drones in the air above the whole planet, and robot vacuums doing a slightly inadequate job for millions of households – the age of automation is certainly growing up.

On the manufacturing side, some groups are now using machines that can sculpt a form out of nothing to produce nearly any object imaginable – made of anything from plastic to ceramic, wood, copper, cobalt or titanium.

In Australia, CSIRO has formed an elite team and bought some equally elite machines, to create a home-grown industry that only this country can offer.

The CSIRO Future Manufacturing Titanium Technologies working group is taking titanium, one of Australia's many abundant resources, and kick-starting a supply chain that will see it dug from the ground, turned to powder, fed into a machine, shot with a laser, combed, shot again, and eventually - change the world.

We spoke with Dr John Barnes - a metallurgical engineer, jet-plane builder, laser wrangler and leader of the Titanium Technologies group - to see how far the 3D-printing revolution has grown, and how we can see it mature in the coming years. John says for high-tech manufacture, Australia is uniquely well-placed and beginning to carve a clear mark in the titanium game.

“The group was founded on a strategic direction to try to up-value what Australia does in terms of titanium, because Australia has the greatest value of titanium ore,” he said.

John believes Australia is not far off creating a full domestic supply chain for the cutting-edge material and techniques.

“We can mine the mineral, we can convert it to metal... if you sell metal it's worth about a hundred times more than mineral sands.

“Eight or nine years ago some of our scientists came up with a couple different ways of producing titanium metal from the chemical precursor to the ore... we're at the stage now where we've built a pilot facility for the first process, and the second process is about 12 months away,” Dr Barnes said.

Dr John Barnes works with Lab 22, a Melbourne-based facility that has been using CSIRO's machines to help companies from all industries find new ways to improve their products, designs and processes.

The most recent demonstration of 3D printing's incredible speed and accuracy of design came in the form of these striking purple titanium horseshoes. For John and his team of scientists and engineers, changing the sport of horse racing was all in an afternoon's work.

“One of our people said it would be really interesting if you could produce a horse shoe... and we threw in the 3D scanning,” Dr Barnes said.

“This hits to the customisation component [of 3D printing]... so we went to the horse, scanned it, and played around with the design on the computer.”

“If you're a manufacturer today, it's not all about the final product... it’s the ability to very easily translate data, in this case the data was the reverse of the hoof, and produce something that's now custom.”

The shoes have led to talks with an interesting bunch of potential future clients.

“We've had a couple of discussions with quite divergent groups... one was a bicycle manufacturer... there was a horse racing team and a motor racing team, and one was a group that does rehabilitation of horses,” John said.

“They liked the aspect of being able to customise the shoe to correct a walking or medical condition that a horse might have.”

Equine orthopaedics was probably not the first thing suggested when the initial CSIRO investments were made, but the shoes show the far-reaching possibilities in the new wave of design and manufacture.

Industries are beginning to catch on.

“If you look at some of the stock evaluations of these companies, they've gone off the charts,” Dr Barnes says, and one certainly needn't be an economist to judge this incline.

“Historically, if you look at some of the companies that operate within this space, you'll see that some of the growth in terms of revenue has been nearly exponential... whether it's going to continue at that rate or not no-one really knows... [but] all the expectations are that these companies are going be selling a lot more machines.”

Additive manufacture has definitely landed, or “if you want to use an aero-space analogy; it's really taking off,” John says.

“The market has sort of tipped in the direction of additive [manufacture]... it's really a question of [to] what breadth we're going to see it applied.”

To a large extent, the machines that may make the factories of tomorrow live in the research labs of today. In Australia this is certainly true; CSIRO's Arcam laser, cold-spray (a super-sonic, room temperature, painting process) machines and thermally-assisted assisted cutting tools sit directly across the road from Monash University's Centre for Additive Manufacture, which houses its own array of futuristic laser-driven printers. The push is on, through initiatives like the Victorian Direct Manufacturing Centre to help industries look at avenues for improvement in many of their processes.

“I describe it as a post-internet technology,” Dr Barnes said.

“While most manufacturing adapted to the internet, this one really excels based on it... it's quite flexible, so the usual business model may not apply. So, if you're a small manufacturer, it doesn't mean you can't access the technology... it could be as easy as emailing your solid [CAD] model to someone across the country, across the street or across the world, and then in a week it shows up in your mailbox.”

“That's the point we're getting across to some of the smaller outfits because they don't have a million dollars to just try something out... we're trying to say; 'You don't have to... we'll help you produce some prototype parts'.”

Dr Barnes says that for anyone who already works in three-dimensional digital design – realising the capabilities of additive technology can prompt some profound “Eureka!” moments. There are still some barriers to 3D printing for the layperson, though as Dr Barnes added; “it's just getting easier and easier.”

“The two most interesting components in the space at the moment are; the access to 3D scanning, which is getting as simple as taking some pictures with your iPhone... and then, the ability to design stuff for yourself, rather than starting from something you scanned... [There's] and iPad app now where you can draw something with your finger, turn it into a solid model and have it printed out,” he said.

Even the researchers and engineers designing the equipment are bursting with ideas for ways to use it. There are projects looking at putting 3D printing labs onto aircraft carriers, submarines and spaceships - rather than a load of spare parts and single-use tools. Another plan might see a device which can use sand and sediment in disaster zones as a material to print temporary relief housing on the spot. It will be exciting every year from now, perhaps even every week, to see how the technology pervades our traditional methods with its revolutionary and game-changing ways.

“People have always said; 'if I could do this, I'd sell a million of them', well – now you can do that!”